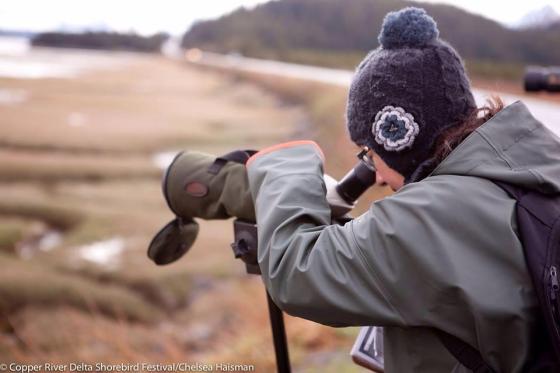 It has been an unforgettable experience conducting surveys everyday since May 1st. The first day I  surveyed I only saw a handful of shorebirds, but by the 5th day I saw shorebirds by the thousands! It was stunning. 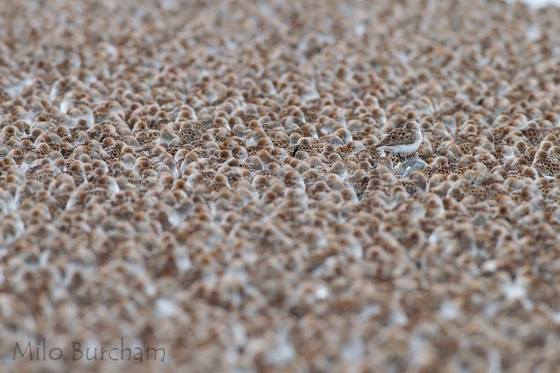 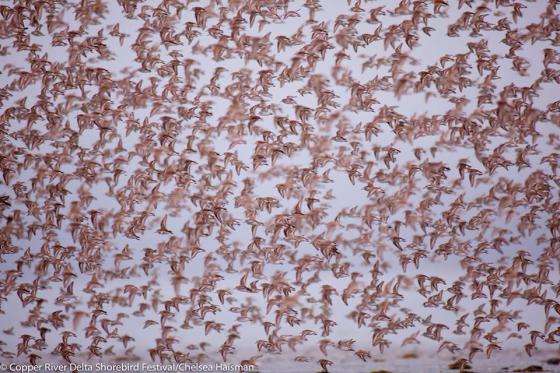 Estimating large flocks was not easy, especially when the flocks moved from one side to the other when I was halfway into estimating the flocks. I had to be really cautious not to recount flocks, and often I had to start estimating my flocks all over again when I was halfway into my estimation. Although it was frustrating when they moved so much, the sound, the shape, the colors they made when they flew in unison was hypnotizing. Often the large flocks were composed of Western Sandpipers and Dunlin, when they flew together the sound of their wings resonated as they constantly changed their angle. When they changed their angle in flight, there are flashes of white from their bellies and suddenly it is dark brown with orange from their backs or when their perpendicular to the horizon for a slight instant they disappear. (Check out this video of the flocks! https://www.facebook.com/CopperRiverDeltaShorebirdFestival#!/photo.php?v=637458752997669&set=vb.292878567455691&type=2&theater)

Not only was it amazing to see so many shorebirds, but this weekend was our Copper River Delta Shorebird Festival (May8-11th), and I saw many of shorebirders as well! During the festival I hosted a children’s activity Friday night, and helped Susan with her kid’s activity the following day. I had a lot of fun during the festival and these events. For my Friday night activity, I created data sheets and a field guide to some of the common shorebirds in our area so that kids could learn about shorebird surveys. During the activity I had shorebird cut outs posted throughout the room where they had to search and identify each shorebird they found. The children that participated had lots of fun, and soon enough some of the kids were identifying birds without referring to their shorebird guides! They shouted WHIMBREL, DUNLIN, DOWTICHER, and WESTERN SANDPIPER with excitement when they spotted them. Using the data sheets I created each child tallied their sightings, recording the species and abundance of each shorebird.

The following day Susan made a presentation describing what makes a shorebird a shorebird. The children who participated were are 1-8 years old, and were very energetic. Susan described how shorebirds vary in size, color, and shape, but they all live near the shore. After the presentation the kids made their shorebird masks, one child named Robert (in the orange T-shirt) even made a giant red worm to go with his mask! We had a blast! 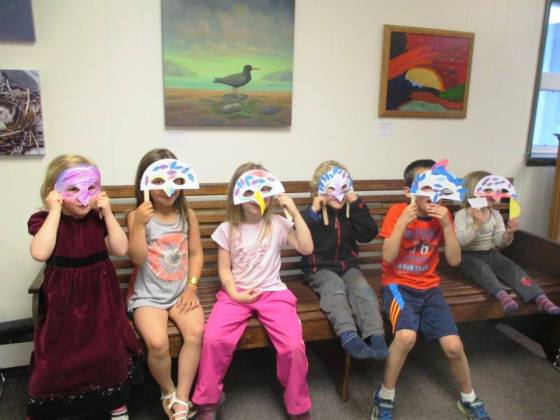