For the past two weeks my role in the wildlife devision of the U.S. Forest Service changed temporarily from studying Dusky Canada Geese to European Black Slugs. I spent several weeks learning all about the slugs, and wishing that more was known about the species.

European black slugs (Arion ater) were introduced to much of the Pacific Northwest of the United States and southern British Columbia in North America from Europe. As global climate changes, they are expanding their range and invading new areas like Alaska. It is believed that within the last 20-30 years Arion ater has been becoming more frequently reported in Alaska (South-central and -eastern Alaska). Cordova, Alaska (where my internship takes place) is an area where the non-native slugs are well established. 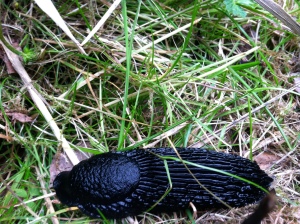 Facilitating a study on European black slugs’ presence or absence in Eshamy Bay, in West Prince William Sound (a newly reported area where slugs were observed in 2012) with Alaska Geographic’s youth group.

Preparing for the Project:


Before heading out to the field I had to find the best sampling technique to study European black slugs in Eshamy Bay. I reviewed a vast amount of literature on various study methods and invasive slug removal. I learned that there are several ways invasive species are managed: Manual, Biological, and Chemical methods were the most frequent in the literature. Manual removal of slugs is really time consuming and may not be effective in large scale areas, but it is the safest for the environment and other wildlife. Biological control uses the introduction of predators, parasitoids, and pathogens as a way to control problematic invasive species. Biological control methods have the potential to have adverse effects on existing ecosystem through the introduction of predators or diseases that often don’t exclusively prey on the invasive species but also native species, often creating a bigger problem. Chemical control methods are commonly used in agriculture to control pest such as slugs, but they also affect non-targeted species such as birds and even humans.

Learning all about slugs and management practices was very fascinating. With the help of my supervisor Erin Cooper we decided to repeat the sampling technique used on Observation Island  (a small island near Cordova where slugs were introduced).

You may be wondering HOW DID THE SLUGS ARRIVE TO ALASKA? Well, it is believe that slugs were introduced to Alaska from Washington state. Slugs could be transported through potting soil or in nursery plants, as well as on pallets and cargo that is shipped from one place to another. In Cordova, slugs are observed to be concentrated on or near populated areas where human activity is frequent. This could indicate that slugs are predominately spreading by human activity such as through existing roadways and human transport via boat or vehicles, because they are not observed in areas of low human activity.

This is the big question I asked myself. I found little information on how they can affect Alaska’s wild areas, since most of the information I found were based on Arion ater’s negative impact in agricultural settings. The literature indicated potential problems such as the negative impact on native species through competition and/or predation, but I was unable to find the concrete answer I was looking for. The date got closer, and I had purchased all of my equipment to head into the field to collect data on Arion ater in Eshamy Bay with Alaska Geographic’s youth group and boy was I in for an adventure!

Read my next post to find out more about the European Black Slug Project in Eshamy Bay with Alaska Geographic!

I found a black slug here in south west alaska. I live in Goodnews Bay, I want to know if this bug is harmful to the environment. So if I see more I will catch them and dispose of them till you Get more information.