Encounters with White–Crowned Sparrows and their Life History

One of the most common birds we band during the Fall in Southern Oregon and northern California is the charismatic white-crowned sparrow. This bird was a favorite of mine while living on the Oregon coast for their beautiful song that is described as “seeee zreee chidli-chidli chi-chi-chi twee”. As I roved around Yaquina Head Outstanding Natural Area, I’d always see one perched on the top of a shore pine singing from the top of his lungs (most likely a male, females rarely sing). Its singing at the same time as waves crashed against the rock cliffs were heart-warming and made a pleasant peaceful place to work. Now, I have the joy of being even closer to these birds as I band many of them on their migration.

It is impressive to think that these small 29 grams creatures can migrate as far as 2,600 miles from southern California to the Alaskan tundra. But among the five known subspecies, not all nest in the tundra, some breed in the high alpine meadows and forest edges along the subarctic. There is also a “Pacific” group that remains resident to the coast year-round. In all of these scenarios they look for brushy and open habitat, deciding to make their nest on bare ground with plenty of grasses around.

Females are in charge of the nest-building taking 2-9 days to find all the essential supplies. They gather twigs, coarse grasses, pine needles, moss, bark, and dead leaves to create a 5 in. in diameter cup. Once done, they line their 2-inch deep nest cup with fine hairs and grasses. Clutch size varies from 3-7 eggs, with up to three possible broods in one breeding season. Females also incubate the eggs for about 10-14 days. Once hatched, nestlings will stay in the nest for another 10 days before fledging. The males will use this time in the nest to learn their song. However not directly from their father, but from the general tunes they hear around the nesting site. For this, white-crown sparrows have different song dialects among regions. The dialects will differ on pitch at the trills and buzzes. This fact has attracted a lot of research and I find it fascinating that a male living at the edge of two regions can be bilingual and able to sing both regions’ songs.

Now that it is fall, they don’t usually sing, but I’m happy to see them again. They are stopping at frequenting thickets, weedy fields, agricultural fields, roadsides, and backyards on their way to California and Mexico where they will winter. Others are wintering as north as Washington, Idaho, Kansas, Kentucky, and Maryland. So it is important for us when banding, to properly identify them among the five subspecies. We focus on the lores, bend of the wing, underwing coverts, and bill color, which so far I have only seen the Gambel’s and Puget Sound subspecies.

The banding site at Grant Pass is where I have seen the most, likely for its brushy habitat. White-crowned sparrows are ground foragers, searching for seeds of weeds and grasses, which they complement with a great number of caterpillars, wasps, beetles, and other insects. But, additionally they eat some grains and fruit like blackberries, which is what the Grant Pass site is full of. I remember the first time I saw a white crowned sparrow there, I thought it was bleeding from the mouth! There was a lot of reddish- purplish color on the beak, which had soaked through the bird bags looking like fresh blood. But, I was relieved when my fellow bander pointed out that it was simply coloring from the blackberries it had eaten.

It’s interesting to get know different species of birds and watch their different behavior as we walk through the sites during our area searches. There are things such as the “double scratch” behavior that I wouldn’t have noticed unless I took the time to walk slowly and quietly around the site. This behavior is common in white-crown sparrows, it involves hopping backwards, turning leaves over, and then hopping forwards followed by a pounce.

It’s the  small encounters such as this that make a banding day special. I’m eager to see what new encounters I’ll have and new appreciations I’ll make. 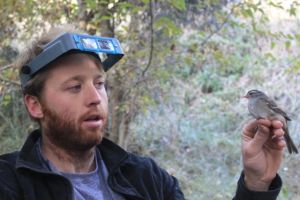