The extended volunteer Naturalist Training classes started this past Saturday, February 7th, and luckily for me the training started off with what would be my favorite topic, “Land and Habitats.” The first presenter was Professor of Cabrillo College David Schwartz who gave a lecture on the “Geology of Elkhorn Slough” and our second presenter was Elkhorn Slough’s Stewardship/Habitat Specialist Bree Candiloro who gave a lecture on the “Habitats of Elkhorn Slough.” While both lectures were incredibly interesting and engaging I must say that my favorite was the geology lecture by Dave. As an earth scientist by education the various geological processes that lead to the formation of the slough captivated me and as a future hydrologist I was fascinated by the marine and freshwater research that occur in the slough.

After the two lectures the group was taken out on a trail walk where Bree pointed out various invasive non-native plants and native plants. We were also taken to the site of a volunteer named Juana who has done a wonderful job restoring the native plants within her site. All of Juana’s progress was due to her constantly pulling out every single non-native plant while planting native plants. It is the hope of the Slough that once the site is restored with native plants it will be able to sustain itself with no human intervention. 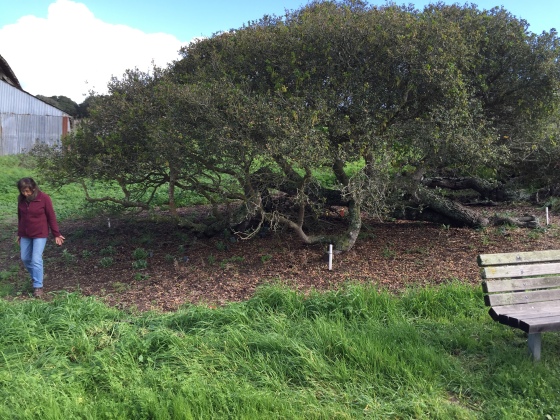