A Horror Story: The Dangerous World of Black Oystercatchers

Black oystercatchers live in a cruel and dangerous world. Within 30 minutes of monitoring I saw a black oystercatcher couple scare off a young black oystercatcher, have an aerial battle with a crow, and have their nesting area disturbed by two young men. But who can blame us? Beautiful places like this tend to awaken the adventurous spirit within all of us. Let’s remember though, that we can recreate without disturbing the wildlife that live in these beautiful places. 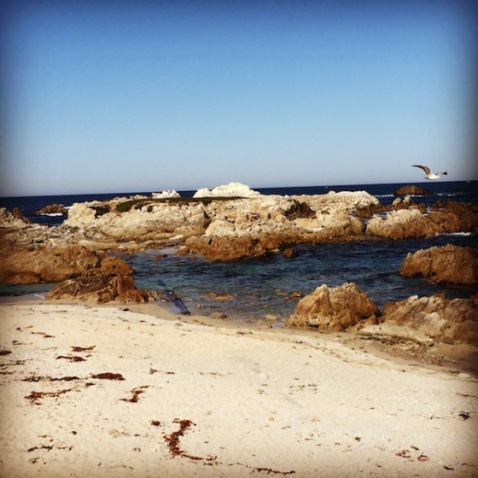 *Who wouldn’t want to adventure through the water into the center rocks, right?

Rick Hanks, who works with the California Coastal National Monument, monitors the black oystercatcher couple that live in the center rocky area surrounded by water. While this location provides protection from terrestrial animals, a few years back during low tide, Rick saw a pair of  canine tracks that led to the nesting area and then led back to the trees. Rick searched for the fledglings, but they were nowhere to be found. And of course black oystercatchers are vulnerable from an aerial ambush. In another nesting disaster a hawk silently and patiently stood on one of the polls that are across the beach.

There the hawk waited until the fledglings were large enough. Worthy for it to consume. Only a foot and entrails were found.

Finally, we humans often pose a threat to not only black oystercatchers but other animals. While we don’t do it on purpose the added stress we cause to an animal is extra energy wasted that could be fatal in the outside world.