Driving up to Oregon 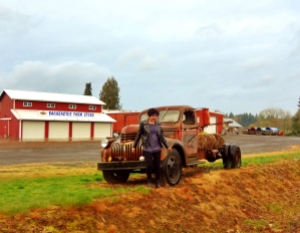 As a city girl, driving through the northwestern parts of the U.S. was an eye opening experience. As we made our way up through California, the city-scape fell further back, giving way to large open spaces, farm land, and mountains. Having spent most of my time in southern California I forget just how different other states can be. Sometimes I think of California as the big picture “American culture” when in reality each region and state across the U.S. has its own unique landscapes, culture and customs.

Along the way I saw a lot of beautiful scenery. I would have to say, that seeing the sun rise as the moon set, was one of the most beautiful things I witnessed. If I only knew how to better articulate my feelings during that moment into something that would resonate with you like it resonated with me, but for now, just know that moment was great in itself. Five in the morning probably isn’t a good time to be thinking about philosophical things anyway, unless you’re Henry David Thoreau.

We didn’t stick around in one place for too long, but one big difference I found in Oregon was having full service gas instead of self-service gas. I never even knew that was an option, but my dad says it’s been years since he has seen that in Los Angeles. I’m surprised we didn’t get yelled at for trying to pump the gas ourselves! I’m not the only one making mistakes though. My partner Lily, who is from Chicago, is still getting used to being able to turn right on red. I’m sure we will become accustomed to the differences in no time.
While Lily and I are getting used to our new home, my dad is having a great time thinking back to the good old days. Oregon reminded my dad of the old Los Angeles, from the days when he first came to California. Old gas pumps, Safeways around every corner, and especially the old cars he saw off the side of the road. This rusty old clunker was similar (if not the same) to the car my dad drove when he was a little boy in Mexico. I don’t usually see my dad get excited about anything, but he started telling me so many stories of his younger days. I drove my dad to the airport on Saturday afternoon; he left Oregon reminiscing about old memories, as I drove back to Sherwood, where new memories will be made.