Published by karinakilldeer on March 9, 2015

On February 14th I was able to do some outreach with the Elkhorn Slough Reserve for a Migration Festival at Natural Bridges State Park in Santa Cruz, CA.

Since the theme of the festival was migration we decided to mostly focus on birds. We brought along a map that showed the different migration routes and distances for several birds. Several people were interested in the map and were amazed at how far some birds travel.

We also had a migration game that former intern Hugo Ceja came up with. It highlights the dangers that birds often face during their migrations such as predators, crashing into windows, or becoming stranded in places that don’t have enough food. I think this game was good because it allowed the children who played it to understand some of the realities that wild animals face and why it’s important for us to try and protect them.

Aside from birds, there were several other organizations who were tabling for insects, especially the Monarch butterfly. Natural Bridges State Park has a large population of Monarch butterflies and there were several fluttering around on that sunny day. I believe that having the monarchs there allowed people to make a deeper connection with the importance of preserving the monarchs, especially since they are highly threatened and becoming endangered.

It was a great day to do outreach because the weather was sunny and beautiful which allowed people to come outdoors and enjoy their state parks. Hopefully we will see some of the people who stopped by our table at the Elkhorn Slough Reserve! 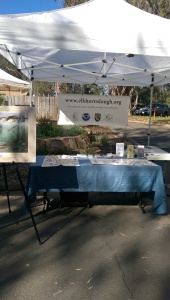 Our table at the Migration Festival! 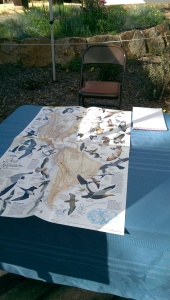 Our map showing the different migration routes of several birds. 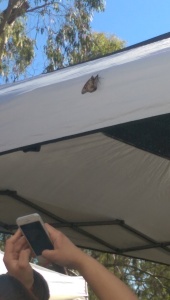 Some monarchs decided to try and breed right in front of us!