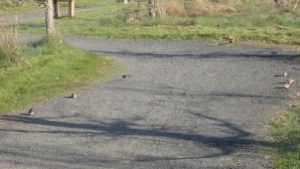 How many Dark-eyed Juncos do you see?

I thought I knew a great deal about invasive species until I saw a nutria swim across a wetland at the Tualatin River National Wildlife Refuge.  It was a gorgeous morning without a single cloud in the sky. And no, the immense flock of geese hovering over our heads was not a grey thundering cloud.  An eager group of volunteers and I were huddled around the site manager, Erin Holmes, as we learned about how the wetlands of this refuge were managed. Midway through Erin’s sentence she lifted an arm up and pointed out a large rodent wading through the water. In shock I opened my eyes wide and brought my binoculars to my face. WHAT IN THE WORLD WAS THAT!?! I have never heard about this animal before and now I won’t stop hearing about the nutria. I have seen it already twice in the span of two days.  Apparently this South American native has caused havoc in wetlands in the U.S. and other countries. It is definitely a nuisance and it is not welcomed here at this refuge.

Unlike the nutria, I have been taken in so kindly by both the people and the wildlife. The staff and volunteers at the refuge are so sweet and knowledgeable. I really enjoy being in their company and am beyond excited to work with them for the next six months. I have also learned that kindness is not limited to the people I have formally met.

On an early morning I had the opportunity to explore the many habitats of the refuge. On this mini adventure I was accompanied by a group of 20 Dark-eyed Juncos foraging for food on the gravel path. The juncos led the way for a good portion of the trail but eventually we split ways. Although the juncos had gone away there were plenty of other birds to watch. There were birds I had seen before and other birds I didn’t even know existed. Fortunately, I was able to ID a few of these new birds! As a novice birder, I always feel so accomplished when I am able to get my mental picture of the bird I am observing to match the field guide. Or better yet when the calls you are hearing match the call descriptions in the guide. Does anyone else relate to this awesome feeling?! Anyways, I had finally reached the forest portion of the refuge when I decided to call it a quits. I would save this habitat for another day, there was too much going on around me and I could easily spend a few more hours here. As I ventured back to the visitors’ center I realized that many other people had arrived to enjoy the refuge too. Most if not all of the people I passed on my way back, gave me a great big smile and said hello.  Oh yeah. I’m going to love it here.

I had to look up what a nutria was! They’re so cute, their teeth look like they’re wearing a grill.

Isn’t it a strange animal? I like beavers more though ^-^