I may have been born and raised in Los Angeles but have not explored this grand city! I felt fortunate to conduct surveys for the Western Snowy Plover, a federally threatened species, at four beaches – three that I’d never been to before.
Beach-wide Western Snowy Plover surveys are conducted four times a year in Los Angeles County, including in winter, early and late breeding seasons, and in the fall. The surveys are completed at thirty different beach segments in the Los Angeles County.
I conducted the surveys at Zuma beach (with Carlos J.), Leo Carillo State Beach, Alamitos State Beach, and Belmont Shore. These four beaches are in different ranges in LA. Two of them are by Malibu (Zuma and Leo Carillo), while the two are in Long Beach – which is more urbanized and populated than in Malibu. Highly populated or not, Western Snowy Plovers were unfortunately not found at any of the beaches. It was surprising to know that there have been Western Snowy Plovers found at the beaches in Long Beach. While looking out for them, I came across many potential disturbances other than the common beach user, including beach groomers and a 4-acre dog park that opened in 2003. I counted at least 30 dogs off leash. Not only did I find these disturbances, but I found a heavy amount of trash within the kelp in the wrack line. Snowy Plovers forage on invertebrates that live in the kelp, so minimal to no kelp and litter within kelp may affect this federally threatened bird.
So where are the Snowy Plovers that have been found at these beaches previously? Snowy Plovers move in flocks so they may have moved North or South to beaches that have better access to food!
Before becoming an Environment for the Americas intern, I had the opportunity to assist in leading school field trips for inner-city students at Dockweiler Beach. Dockweiler, a heavily populated beach adjacent to the Los Angeles International Airport (LAX) contains a fenced enclosure (100 x 300 ft) with an opening to the ocean. Due to this protected area, 3rd- 5th graders spotted a few Western Snowy Plovers! The most I have counted during a fieldtrip was nine! It was a great experience to engage young naturalists and scientists during these field trips and to now, to engage myself in the world of science and conservation.
I’m looking forward to further monitoring later in the breeding season and hoping to find our cute little friends!
Remember, Western Snowy Plovers’ breeding season is from March to September so keep your eye out and watch your step at your local beach! 🙂 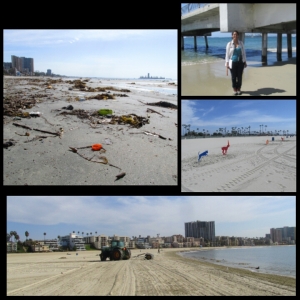 Top Right: Me after surveying the first beach, Alamitos, and before surveying Belmont Shore
Mid- Left: Rosie’s Dog Park, a 4-acre park right along the shore in the surveying area.
Bottom Pic: Beach Groomer doing their job!
Top Left: A lot of litter found in the kelp on the wrack line